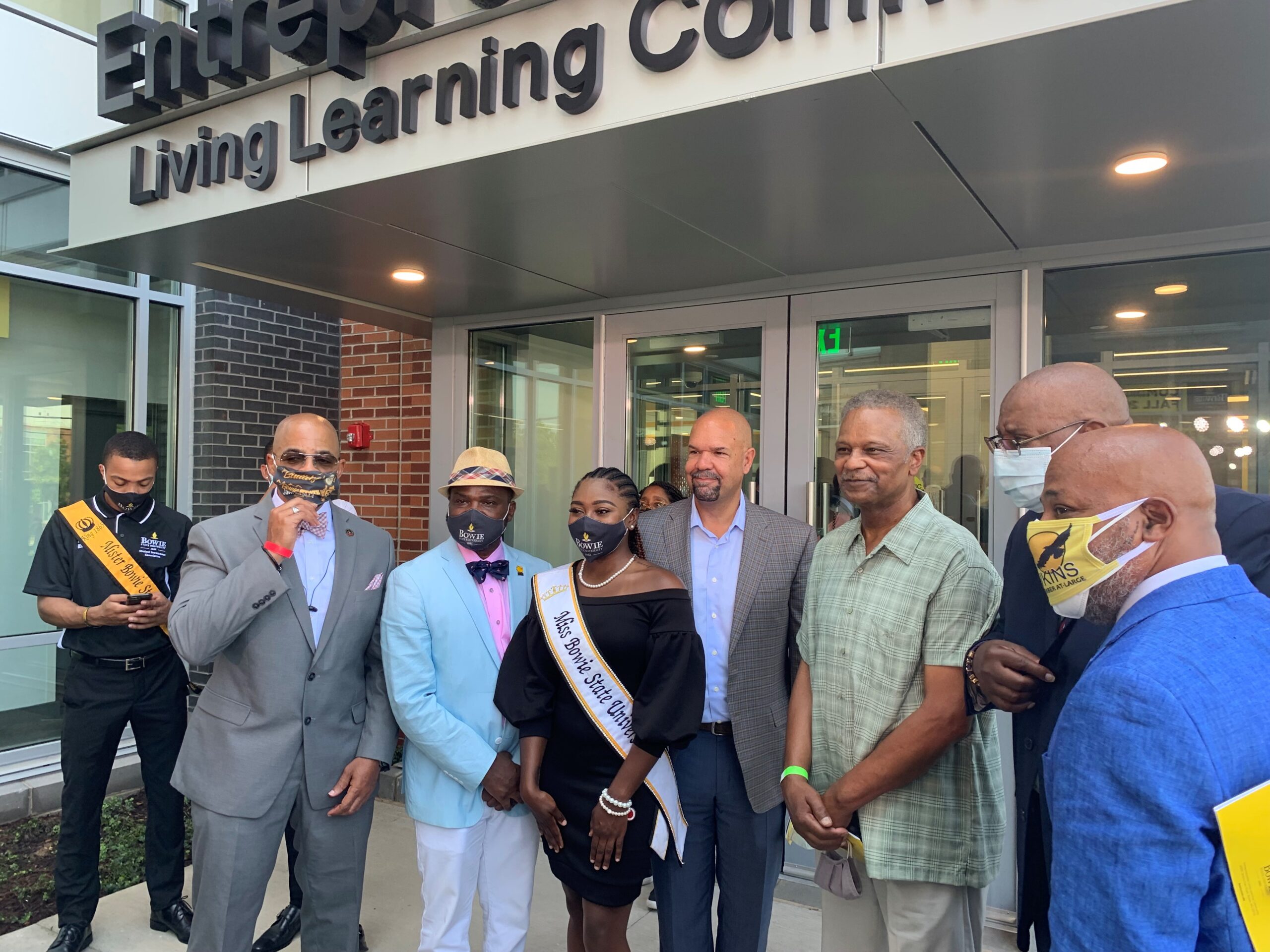 Behind every successful project, there are some amazing people. People like Rodney Wiseman, a 40-year veteran of Smoot Construction. Recently, Rodney served as field superintendent for construction of the new Entrepreneurship Living Learning Community at Bowie State University. At the ribbon-cutting ceremony for the new building, little did anyone know that Rodney’s family has a long and storied history at Bowie State. Rodney is the nephew of former Bowie State President Dr. J. Alexander Wiseman. His Aunt Mary was a professor at BSU and many of his siblings, cousins, nieces, and nephews are BSU alumni. Dr. Wiseman had a building on campus named after him and now our Rodney Wiseman’s legacy is cemented in the 6-story, mixed-use facility that combines campus housing, classrooms and entrepreneurship center at the gateway to BSU’s campus.

While this building is a crowning achievement in Rodney’s four decades-long career, it’s not over yet. Today, you will find Rodney at the National Air and Space Museum doing what he loves, building!

Chrystal Stowe is Selected as One of D.C.’s Most Influential Professional Women

Smoot Construction’s Director of Business Development, Chrystal Stowe, is part of a group of 25 women considered to be the D.C. region’s most influential professional women of 2020.  The Washington Business Journal will be hosting its 17th annual Women Who Mean Business Program on Wednesday, October 7, 2020, to honor these outstanding nominees at a virtual live event.

Her impact on the community

Chrystal has been in the construction industry for twenty-five years and is a former TV news anchor with over fifteen years of experience with media, public relations and community affairs.

In addition to leading Smoot’s business development efforts, Chrystal develops and implements community initiatives such as training and employment opportunities for local residents and contracting opportunities for small and disadvantaged businesses. As a certified compliance administrator Chrystal has an outstanding record of accomplishments with achieving and/or exceeding participation goals on complex, large scale and fast-track construction and development projects.

Chrystal is also a highly regarded subject matter expert on minority business and local hiring initiatives for federal, state and local agencies and shares her knowledge as a member of the following organizations:

To no surprise, Chrystal has been given two other awards throughout her career for her outstanding contributions to the regional area.

Six Days until the Reopening of the Martin Luther King Jr. Memorial Library

The wait is almost over. On September 24, 2020, a community centerpiece will reopen that blends the best of the physical and digital worlds of information in a modernized 21st-century environment. According to the Smoot | Gilbane team’s Project Executive, Peter Ege, the highly anticipated Martin Luther King Jr. Memorial Library is not just another project, but a great example of improving the heart of the city’s fabric. But don’t just take his word for it. Take a sneak peek of the project right here:

Once open, the MLK Memorial Library will be temporarily providing limited services to the public where people can:

On September 11, 2020 at the PEPCO White Flint construction site, Smoot Construction took a moment of silence to honor the victims and survivors of 9/11. We will never forget and always salute them.

The MLK Memorial Library Overcomes the Coronavirus Pandemic and Other Challenges

Today’s coronavirus pandemic didn’t stop the Smoot|Gilbane team to deliver substantial completion of the $211-million Martin Luther King Jr. Memorial Library project in Washington, D.C., on budget and one day early. The three-year effort transformed the historic deteriorating 48-year-old building into an information and community centerpiece that blends the best of the physical and digital worlds in a modernized 21st-century environment.

A redesigned entryway, monumental helical stairs, 200 seat auditorium and a double-height reading room are just some of the spaces that provide a wow factor immediately when a person walks into the 426,000-sf building. And kids won’t want to leave the giant wooden slide adjacent to the 13,500-sf children’s area. The facility also includes music and art studios and learning labs for trade students.

Peter believes people who visit the MLK Library will be inspired by its modernization, especially children, and hopes everyone sees this was not just another D.C. project, but a great example of improving the heart of the city’s fabric.

Congratulations to our very own, Daniel Blaise, for receiving the 2020 ACE National Outstanding Mentor award! In addition to being celebrated in an upcoming Engineering News-Record ACE yearbook publication, the ACE Mentor Program of Washington, DC, will receive funds to award a student scholarship in Daniels’s name.

Daniel has been with the ACE Mentor Program since 2014 and is considered one of the go-to mentors for leading a team. In Washington, DC, he started and led a team of mentors at Crossland High School and was instrumental in guiding the program at the Friendship Collegiate Academy. And most recently, he has taken on the task of implementing ACE at YouthBuild Public Charter School. Daniel’s success is a result of the contributions from his teammates that make the after-school sessions a positive and exciting experience for the students.

“[Daniel] is truly an outstanding mentor” 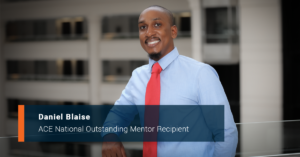 It is no surprise Daniel was picked for this award. He has made a huge impact since becoming a part of the Smoot Construction family in 2017 as a senior project manager. And over the last 10 years he has helped grow and improve communities through several construction projects and development programs. He enjoys sharing these experiences with others, especially students who are eager to carry on his passion for the ACE industry.

About the ACE Mentor Program

The ACE Mentor Program of America was founded in 1994 to encourage students to pursue careers in the Architecture, Construction, and Engineering industry. Over 10,000 high school students participate annually.

Smoot Construction of DC employees, along with family and friends, participated in the first annual Susan G. Komen, DC MORE THAN PINK™ Walk, on September 7, 2019. The event encourages people to go beyond breast cancer awareness and take action by raising funds for access, research, and cures. Smoot Construction of DC did just that.

The shirt design for the Smoot Construction of DC team represents the fight in us to never give up for this vital cause. Leading up to the DC MORE THAN PINK™ Walk, we had a fun competition to see who could raise the most money. By the day of the event, two employees were neck and neck. The difference was $16. And the outcome? Donations from their family and friends totaling $2,750.

Overall, the Smoot Construction of DC team raised $3,556 for the DC MORE THAN PINK™ Walk and placed third in the corporate team category. But the fight isn’t over. The fundraiser is still open. To date, the DC MORE THAN PINK™ has raised $676,918. Its goal is $1,000,000. If you’re interested in donating, please click here. 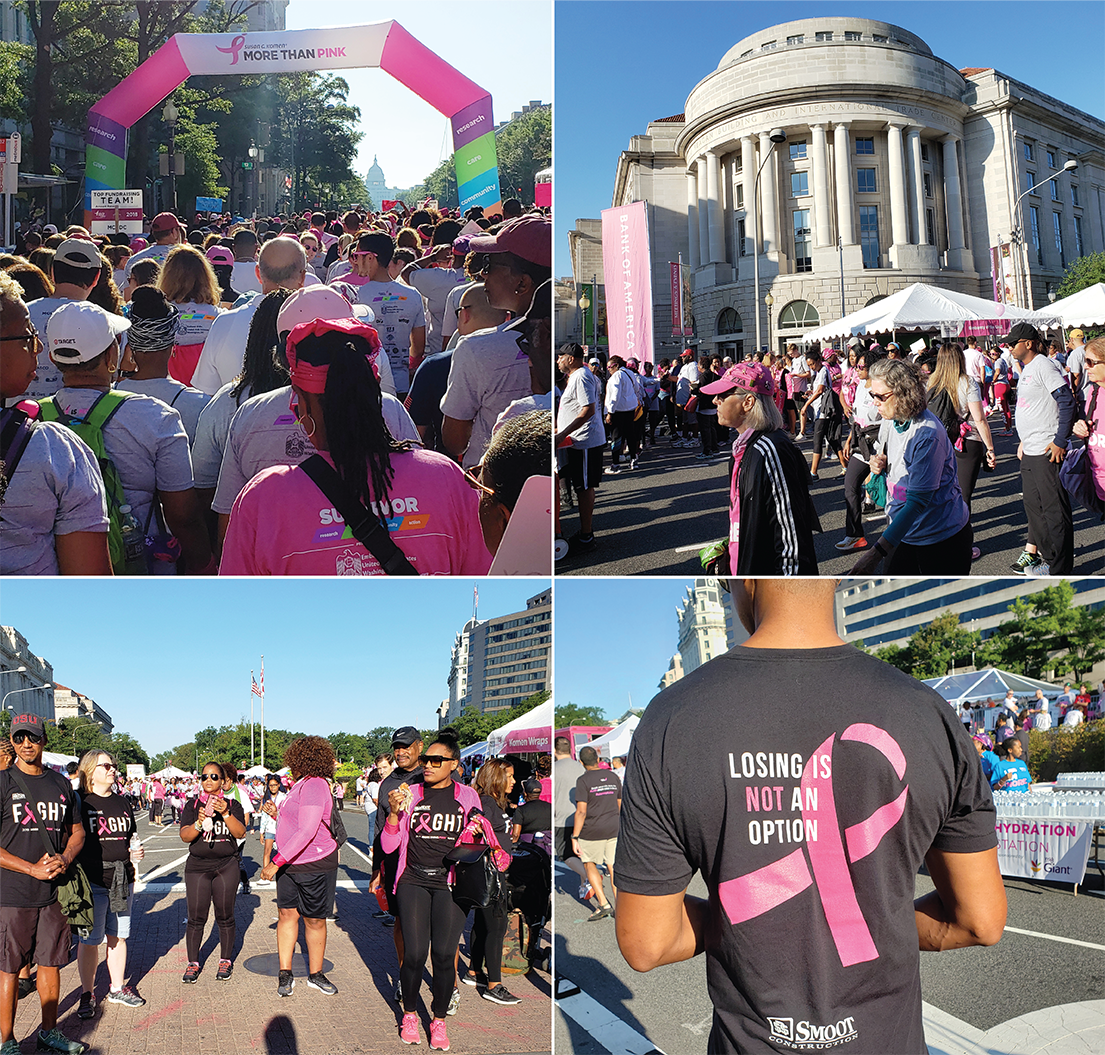 Teamwork made the dream work as the project team from Children’s National Research and Innovation Campus explored the National Mall on a Segway tour of the most historic and popular sites in the Washington, DC area. En route on the journey were several Smoot Construction favorites, including the National Museum of African American History and Culture, Smithsonian Natural History Museum, Smithsonian Air & Space Museum, and the US Capitol.